An integrated chelated fertilizer designed for foliar application on maize. 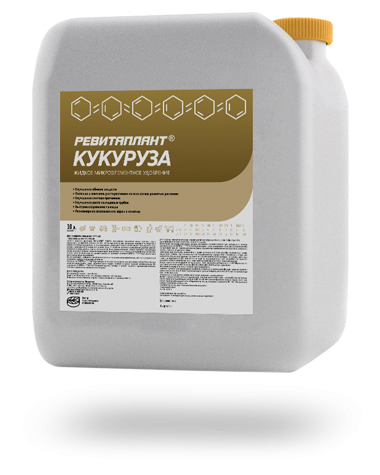 The individual feature of this crop is a vivid visual manifestation of zinc and iron deficiency. This is due to the fact that for a high yield, maize has to have a well-developed vegetative mass, which requires a higher amount of growth substances, and iron and zinc are the ones that stimulate the synthesis of auxins - growth substances that the plant especially needs.

During an early spring, when corn develops slowly, and the lack of micronutrient nutrition is a factor that greatly inhibits the development of crops, especially in low pH soils. During the growing season, maize absorbs a significant amount of trace elements, which play a significant role in all its vital processes.

Any physiological problems caused by nutrient deficiency can be avoided by using a new domestic chelate fertilizer Revitaplant Maize stimulating the following: